There are times, and I’d bet good money that everyone with Coeliac disease/anyone that eats a gluten-free diet will agree with me, that eating outlet’s lack of awareness could quite literally make you scream with frustration, and on particularly clueless occasions – “oh sorry you can’t eat this, it’s got milk in”…what?!?! – cry of despair!

Don’t get me wrong, awareness of the disease is a million times better than it was a few years ago. I’d say that there is at least one option in 90% of the popular coffee shops/cafes on the high street these days but if I’m honest, they’re generally quite disappointing. Anyway, I didn’t just start this post to have a good moan and a groan about lack of awareness and variety out there for us – but if your reading Costa, Caffe Nero etc. I’m not impressed! – the point of this post is actually to tell you about an amazing restaurant I’ve found, which now joins my list of ‘places to go when you feel like no-on understands what gluten even is!’

So, after my latest ‘banging my head against a brick wall’ encounter with a restaurant manager who told me I couldn’t have bubble and squeak because it contained potato, but recommended a whole host of food which were based around flour, I took myself off to a place that was recommended on a GF website I subscribe to as somewhere that just gets gluten-free. That place? Honest Burgers… 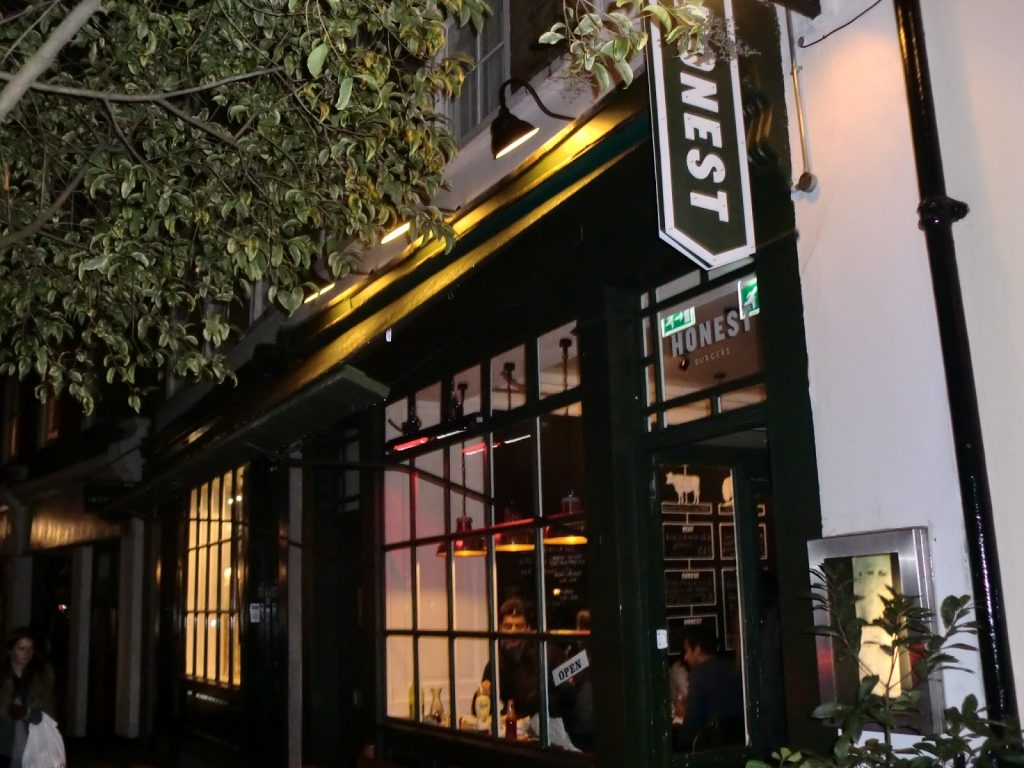 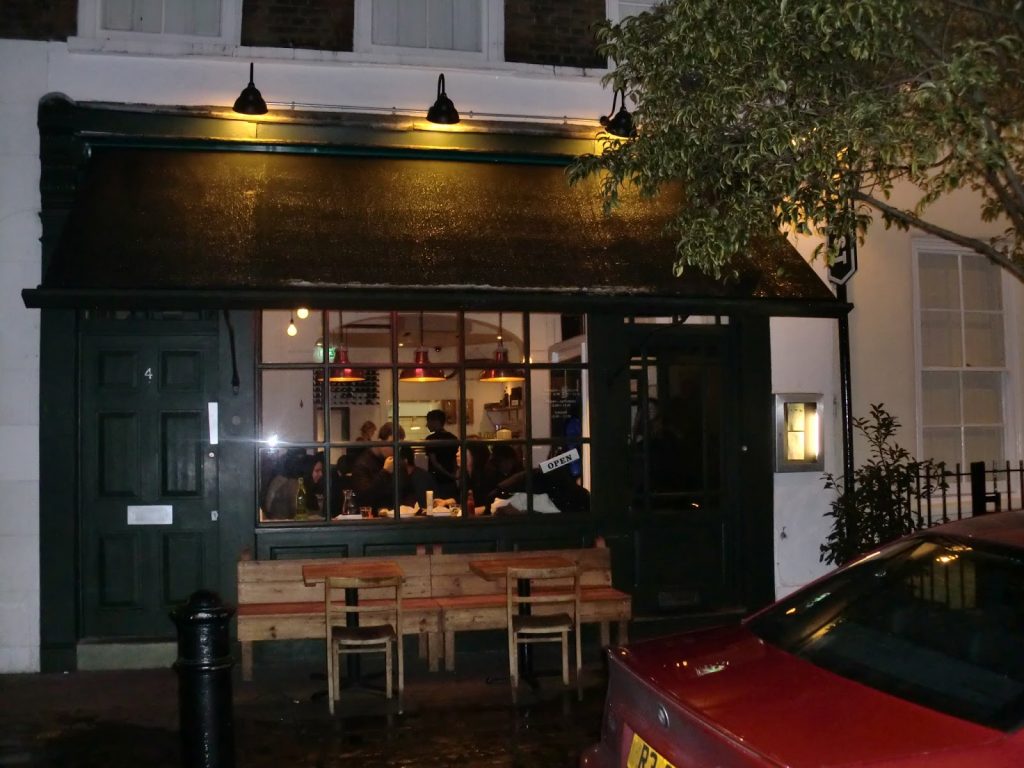 Now, I hate slagging off (how articulate) places, but bearing in mind that overall this is an extremely positive review – and the pro’s by far outway the cons, which kind of makes writing them redundant…but I’m gonna do it anyway – I’ll get the negatives out the way first. The (Soho) restaurant is absolutely tiny, which meant that we were told – without even managing to enter the restaurant for the queue in front of us – that there was at least a 30 minute wait. Due to the size of Honest Burgers there is nowhere you can wait inside which meant we were then wandering around Soho waiting for a call to say there was a table available. When we finally did get a call, we walked in and headed over to a table, only to be shown to a two-seater with two menu’s placed behind what is really only one seat (there were three of us). Now, I’m not a big girl, but even I felt pretty cramped. Put it this way, it was the first time in my life that I was grateful for not having a ‘Kim Kardashian arse!’ Now negatives aside, onto the good stuff, and god is there a lot of it. Cue massive food porn… 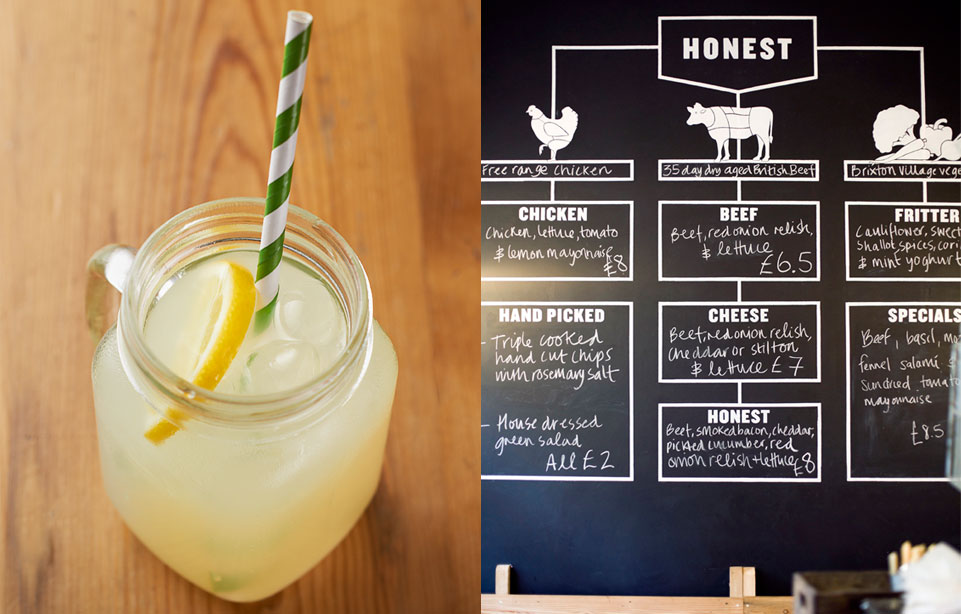 I’ll let you into a little secret, I am quite well known for my love of a McDonald’s Quarter Pounder (with cheese, without the bun) and chips! I know, I know, my classiness never ceases to amaze me either, but it’s just not the same as having a big, thick, juicy burger – what I would call ‘a proper burger’ – with an actual bun, and a bun that doesn’t crumble, disintegrate and generally taste of sawdust at that! This is where Honest Burger comes in, sweeps me off my feet and sends me to Burger heaven….(seeing as we’re talking burgers, a massive slice of cheesiness is absolutely allowed in this post right?)

The food came up only about 15 minutes after we ordered which I was pretty impressed with bearing in mind how long it took to actually get into the restaurant. I went for the Beef burger which already comes with a red onion relish, the gluten-free bun and added Mature Cheddar. Here’s the pictures of how the same burger came up, with the gluten-free bun, and with the normal not gluten-free (duh) bun. 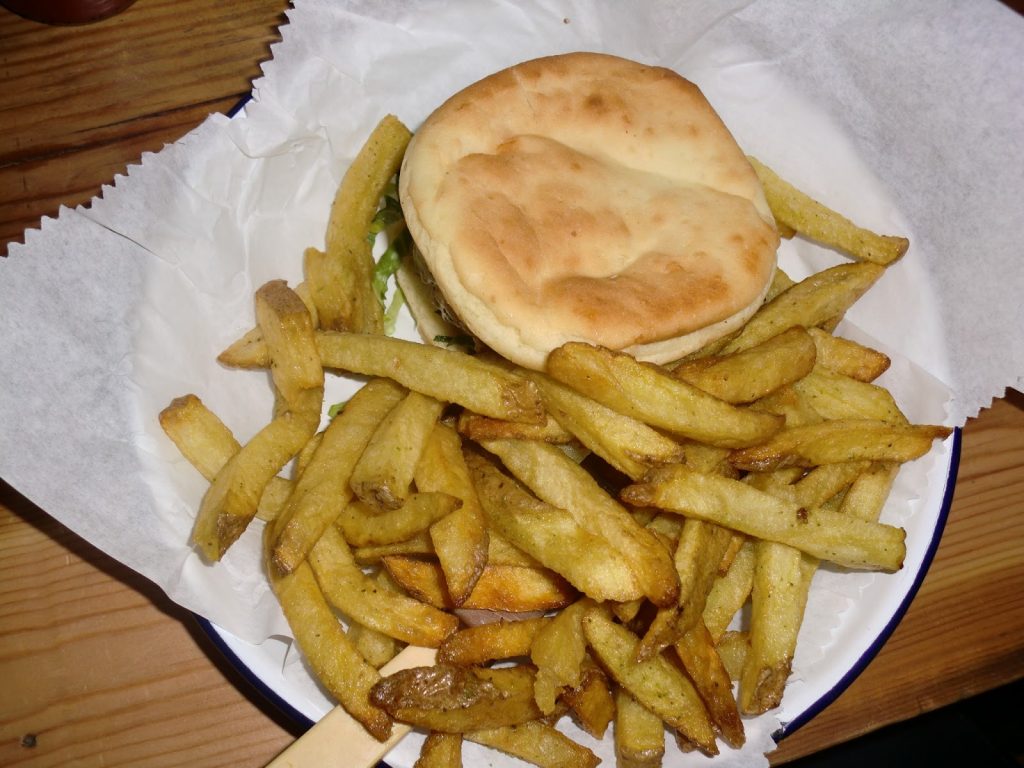 Gluten-free bun above, non gluten-free or normal (hate using that term because that technically makes me ‘abnormal’…don’t say a word) bun below. 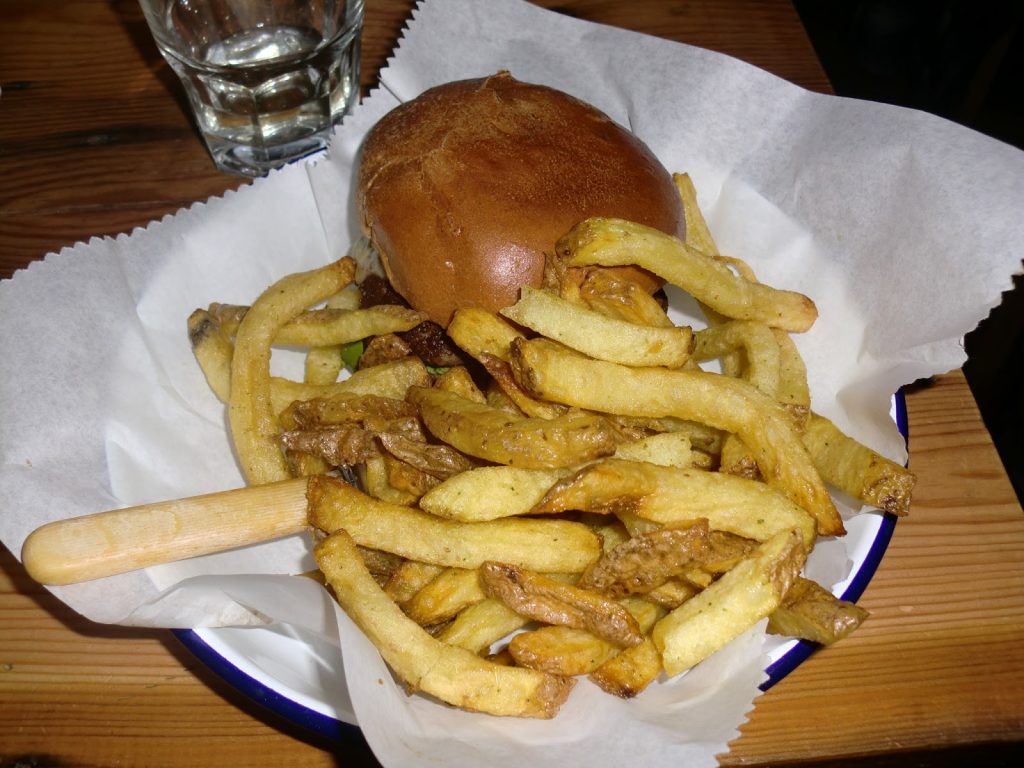 As you can see, the normal bun is a lot more ‘burger bun-esque’ (now there’s a phrase I never thought I’d write) with the glazed, round top. Although the gluten-free bun wasn’t your typical burger bun (if I’m honest I’m not sure that’s even possible, if you’ve had one like it though, please let me know!) it was much better than any I’ve tasted before. As I previously said, moist, slightly chewy not dry in the slightest and the best thing? it actually stayed together. No crumbling, disintegrating and falling apart in sight!
Next up, the chips. One word – wow! Seasoned with rosemary salt, without sounding repetitive, they really were some of the best chips I’ve ever had. Crispy on the outside, soft on the inside (check me out, whipping the poncey food critic phrases out the bag) and most importantly, a good sized portion too.
Finally, and in my humble (and probably not worth taking after my McDonald’s confession) opinion, the best part of the meal was the actual burger itself. My instinct is to say ‘there are no words to describe this’ but that would make for a pretty shit crap review, so I’ll give it my best shot. The meat was cooked medium/pink – but you can request for it to be well done – and was just so tender, (god I feel like such a knob saying that) so tasty, thick and juicy, I actually tied my hair back so my messy mane didn’t fall into the juices when I quite literally dived in!! Jumping on the ‘a picture speaks a thousand words’ phrase, I’ll leave you with a picture because there’s absolutely no doubt that it will do a lot more justice than my words ever could… 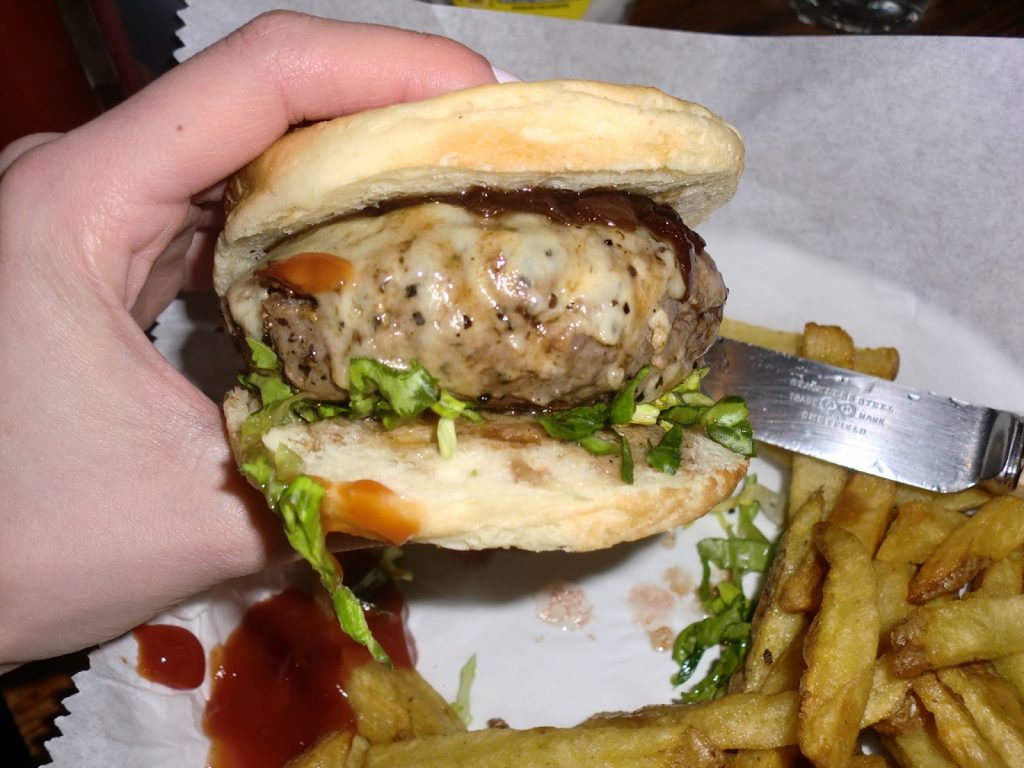 I just wished I’d taken a picture of the inside but if I’m completely honest, it probably wasn’t around for the long enough! I’ll start to wrap this up now because my rambling and waffling is pretty impressive at the best of times but bring burgers into the situation…and I’ll be at it all day. (You lot have such dirty minds)
In all seriousness – I can do serious, believe it or not – if you you’re gluten-free and haven’t been able to eat a burger in a long time or more to the point just love a ‘proper burger’ you need to get yourself down to Honest Burgers. By far the best I’ve ever tried, and this includes before I was diagnosed. Bold statement, but true!
Prices are also extremely reasonable in my opinion too. I won’t list it all but prices, addresses of restaurants, and all that information which I am far too lazy to write out are all on their website here
So, have you been to Honest Burgers? If you have, I’d love to know what you think. Also, any restaurant/cafe/food shop recommendations are so more than welcome, I can assure you I’ll try every single one. All in the name of research obviously!
Hope this post was useful for you guys, thanks so much for reading!
xx
Share:

PREVIOUS POST
"Harvey Nics, Winter coat and the bargain of the century"
NEXT POST
"OOTD: Snowy days and Gluten-free treats"