OOTD: New job, new trainers..and a lack of inspiration for a post title!

I touched upon it slightly in my last post, but in case you missed that – because I’m still not convinced that anyone, bar my mum, would be interested enough to read my random ramblings! – I just thought I’d mention it here that, I got a new job. Praise the lord, Hallelujah, A-bloody-men!

Christmas/January time, unfortunately is a shocking time for TV work. Not many shows start production during/straight after Christmas and the shows that do carry on through the festive period are of course generally already crewed up. But, after the drought, I finally got a heads up about a job on a certain show last Monday, got an interview on Tuesday, and found out that I got the job less than 24hours later on the Wednesday (TV doesn’t wait around does it?) So, as of the beginning of February I will be saying goodbye to Jeremy Kyle (further proof that I am all class!), lie-in’s, endless shopping trips, time to actually blog and basically my social life, and a big fat hello to…. 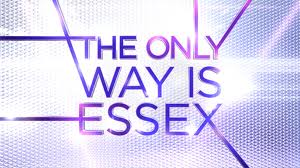 For anyone not in the UK, it’s a similar set up to Jersey Shore but based in Essex. For anyone whose never heard of both of those before, it’s basically a reality show following young 20 something’s in and around Essex. A lot of fake tan, a lot of hair and beauty…in other words, ‘it’s right up my street!’ (you know I’m never going to be able to say that phrase without making some kind of reference to Cheryl Cole!)

As a kind of celebration/farewell to my social life/good luck to myself (does that make me sad? 100% sure it does)….I may have gone on a bit of a shopping spree, followed by a massive feast (Cotto if you’re wondering – Bread, Spag Bol, Tiramisu, heaven!), followed finally by slobbing out on the sofa, watching shockingly bad TV (Splash – apologies to all my friends working on it – i’m talking about you!)

Here’s what I wore. A word of warning, this outfit features my first and only pair of trainers since I was about 12 years old. As much as I love them, I can’t help but feel like a bit of a tom boy, a bit ‘masculine’ in them. In other words…I look and feel like an absolute bloke! 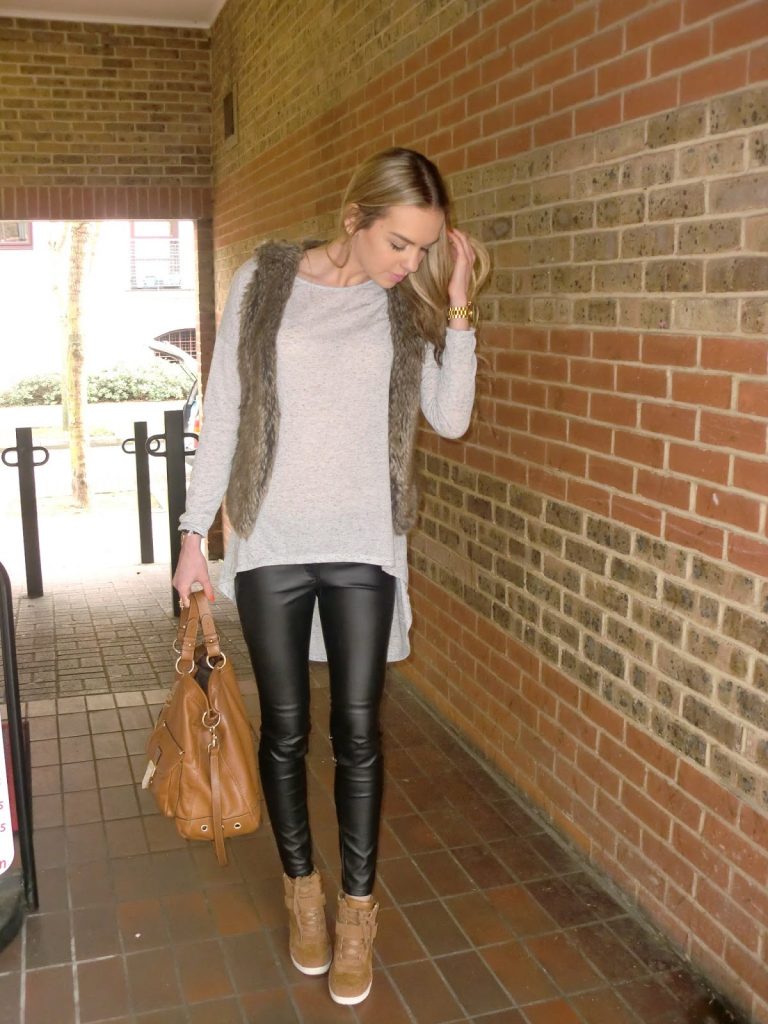 Standard ‘hold the hair out of the face, look at something on the floor that isn’t even there’ pose. Nailed! 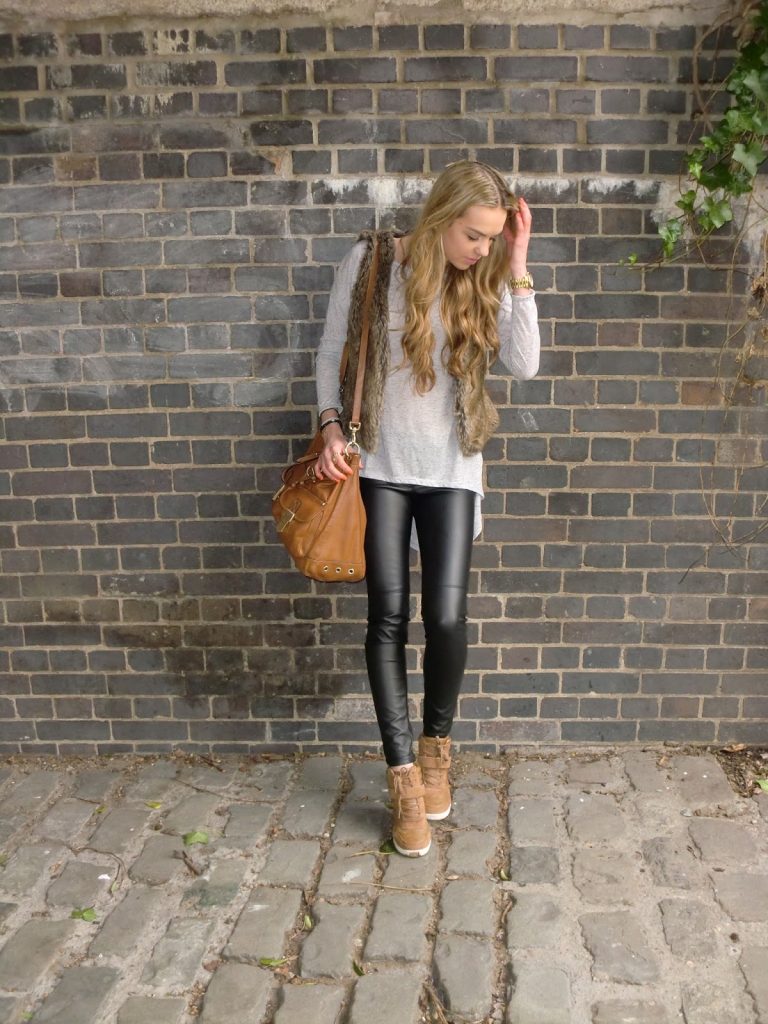 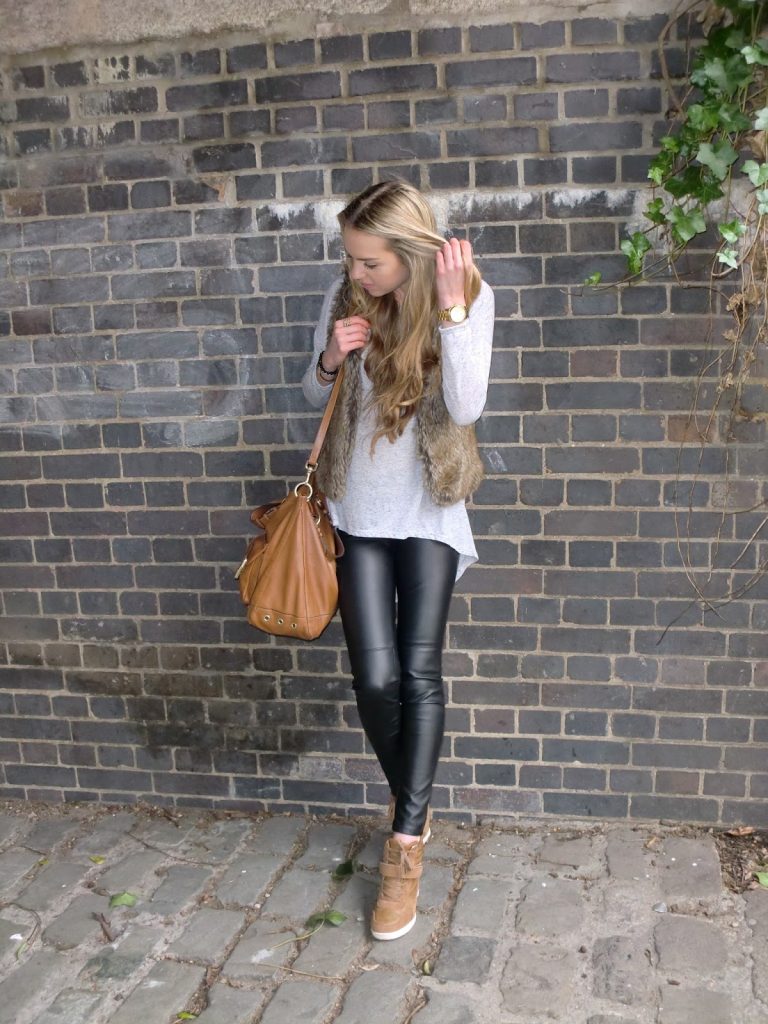 Argghh, there are not enough adjectives to describe just how disgusting the photo below is. So, why have you got it on here you absolute twat? Well, it’s on here because unfortunately it was the only close up I had of the top, gilet etc. I look like an absolute knob, prick, muppet, twat, poser and believe me I want to punch myself in the face as much as you probably do. 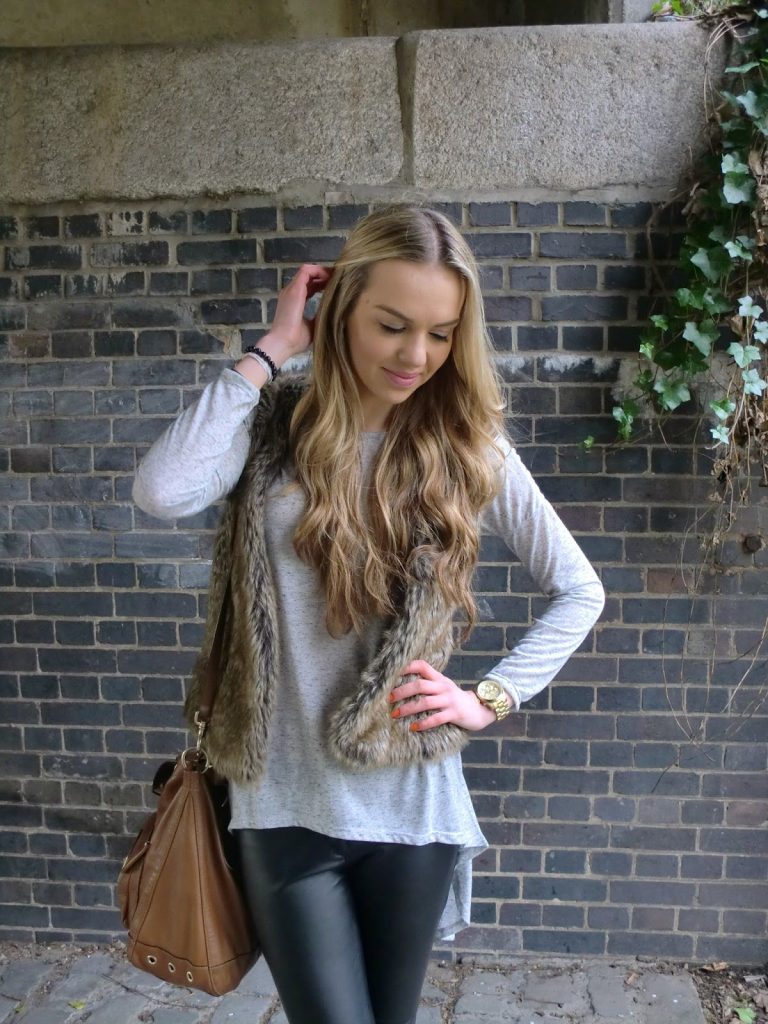 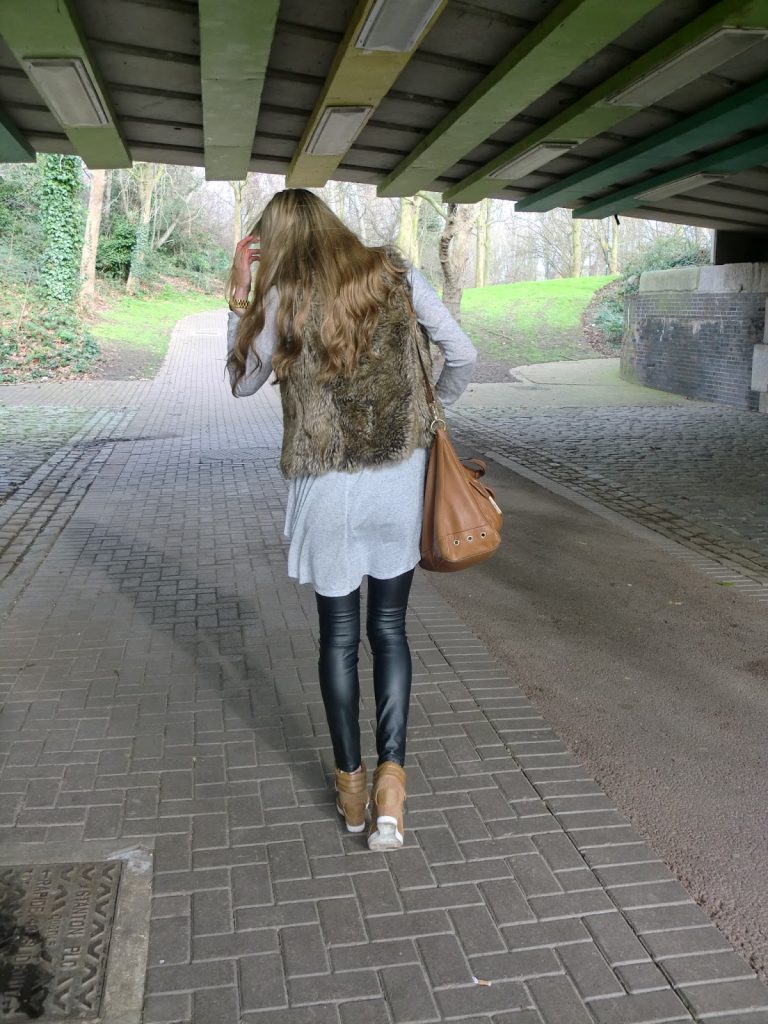 OK I lied. No, let’s not say lied, let’s say ‘didn’t quite tell the whole story’ when I said I bought a pair of trainers. They are quite clearly the ever so popular (read: completely over done) Hi-Top’s that didn’t interest me whatsoever at the height of their popularity. But, now that they’re not the choice of footwear for everybody walking past you on the street, I am suddenly quite ‘fond’ of them. It doesn’t hurt that Jules rocked them in a few post recently, and what she says, goes, in my opinion! 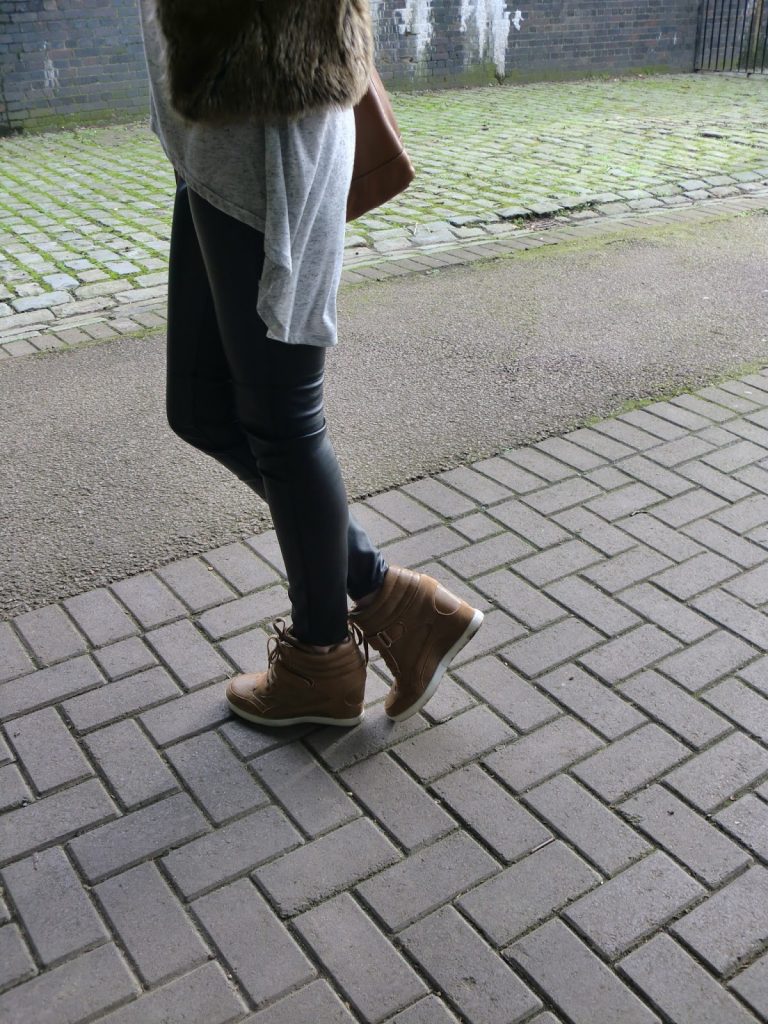 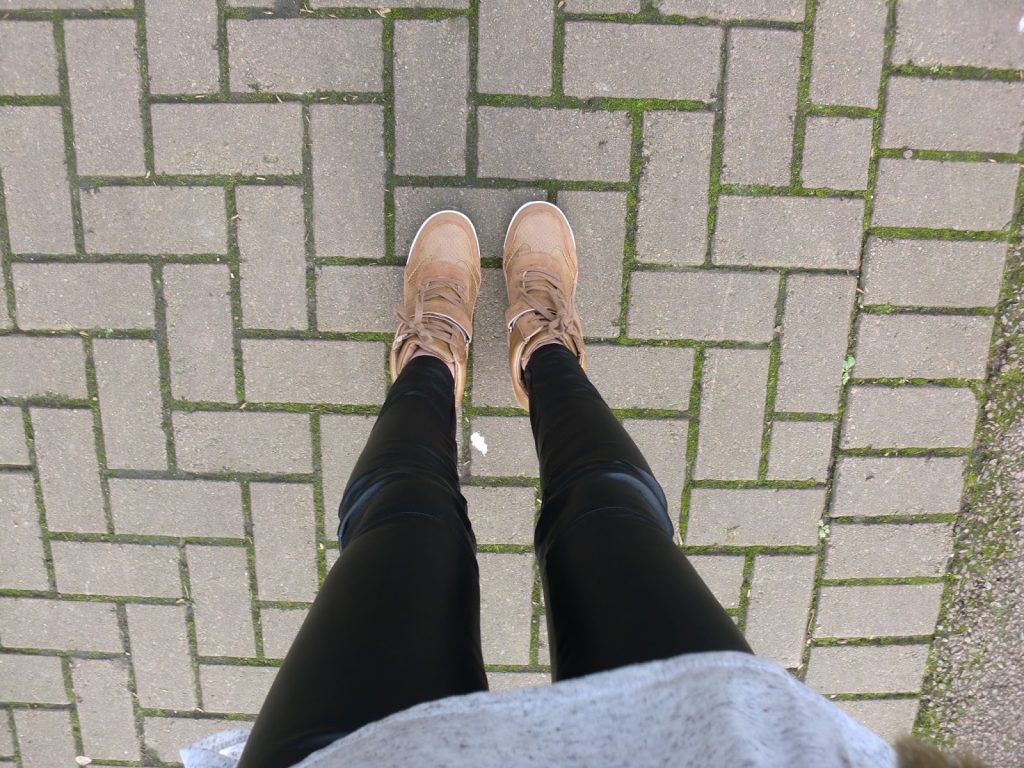 Now, before you all christen me ‘the queen of jumping on bandwagon’s 3 years after the ship set sail’ I am more than aware that these bad boys have been on the scene for a long time but in all honesty, while I liked them, I never found a pair I loved enough to buy. I contemplated buying a similar pair from Ash, but £140 for what is probably just a ‘boy chic’ phase of mine is 10 x more than I’d be willing to buy. So I just have to be grateful for the place I have christened my second home, Primark. For £15, it would be rude not to wouldn’t it?…Exactly what I thought! 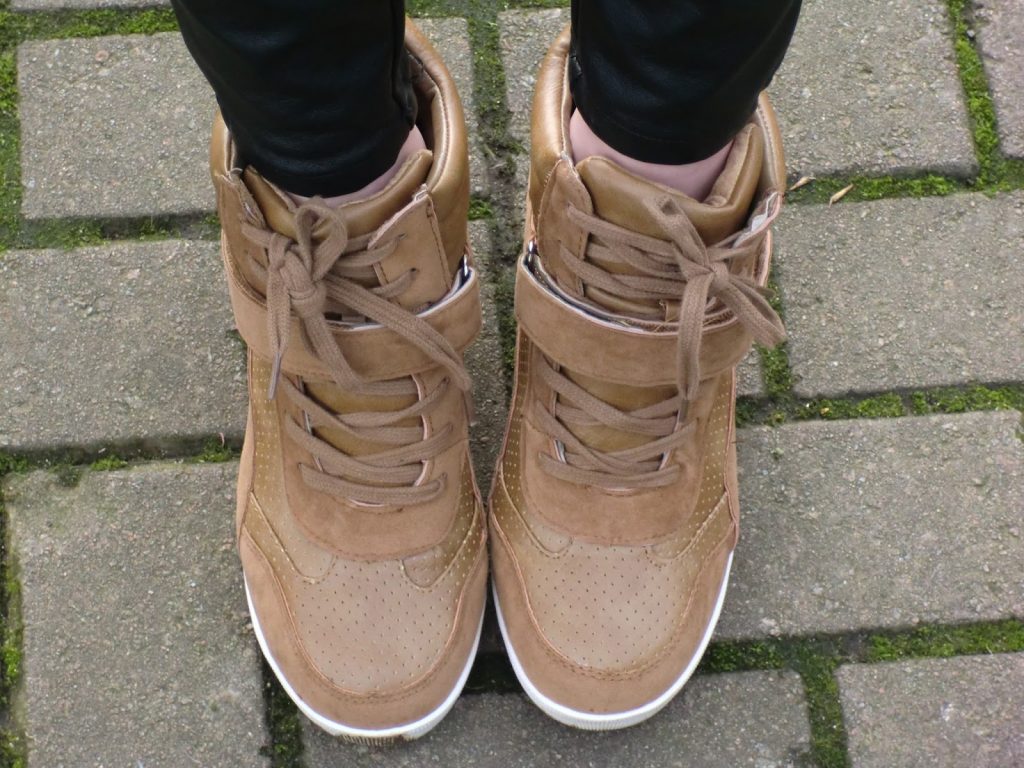 Top: Primark
Gilet: Urban Outfitters
Faux leather trousers which I don’t even need to state where they’re from because I’ve featured them a thousand times already (but I will, for the sake of blog!): H&M
Hi-Tops/the closest thing to trainers I’ll ever be seen dead in: Primark
Bag that was so expensive it made me feel physically sick to buy and therefore will probably feature in every outfit post I will ever write: You got it, it’s the Mulberry

So there you have it. My poor excuse for a pair of ‘trainers’, and the job that will no doubt take over my life for the next 2 months. I want to know your thoughts, any Towie fans out there? Any Hi-Top fans out there? Or am I – as always – completely on my own?
Hope you enjoyed this post everyone, thanks so much for reading!
xx
Share:

23 responses to “OOTD: New job, new trainers..and a lack of inspiration for a post title!”